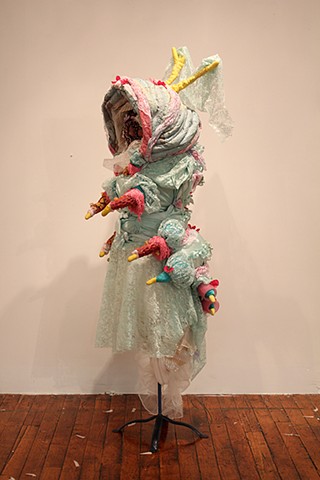 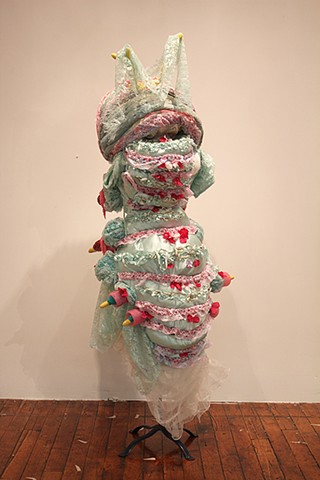 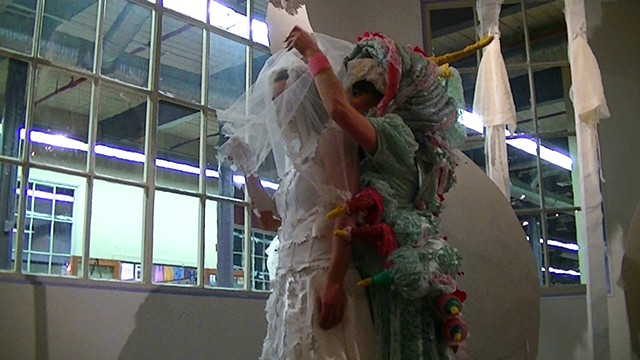 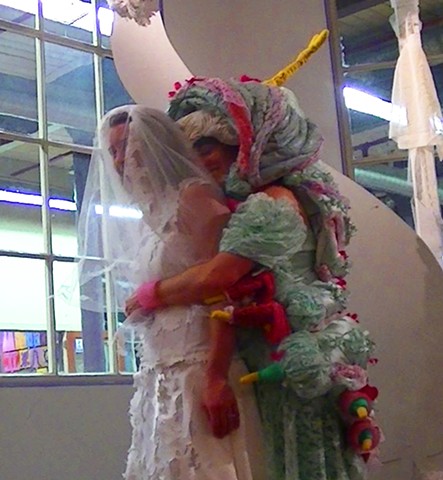 Bridesmaid’s dress becomes caterpillar costume. Constructed for the show, “Merger”, “Pupil” represents the woman in the most infantile of the larva states, a pupa. Her outfit (traditionally chosen for her by the bride) is typically intentionally unflattering in comparison to the bride (who I am not regarding as the butterfly, but as the chrysalis- veiled and in a state of gloriously staged incubation). These divisive comparisons between the women selected for the bridal party are an exaggerated display of the conditioning for women to see other women as our competition or to rationalize/ normalize servitude as part of our duties. I wore the costume for the reception of “Merger”. Elizabeth Alexander wore an altered wedding dress (she cut the lace patterns out- similar to her process of removing patterns from wallpaper and china sets). I would awkwardly follow the bride and carry or straighten her train. Once in awhile I would approach her while she was engaged in a conversation to say “I am really happy for you” in the most monotone, insincere voice I could muster. Most of the performative elements were anti-climactic staging of rituals (cake cutting- and cramming into the bride’s mouth, throwing confetti from a flower-girl basket, standing for cameras in a stiff engulfing-from-the-rear-type-encircled-embrace-). There was no groom – or if there was, he was irrelevant. Weddings from the industrial bridal complex are all about the spectacle of the bride, not about the forward trajectory of the couple. We were following these guidelines- living for the production of this bizarrely prescribed fantasy.